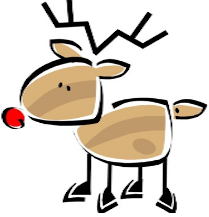 You know Dasher and Dancer and Prancer and Vixen

Comet and Cupid and Donner and…

Did you say “Donner”?

The name is “DONDER”.

Santa Claus’s eight flying reindeer first appeared in American literature in 1823 in the famous poem by Clement Clarke Moore called “A Visit from St. Nicholas” , popularly known as ‘Twas the Night Before Christmas. You can read the entire poem at the link above.  From the text:

More rapid than eagles his coursers they came,

And he whistled and shouted, and called them by name;

One hundred and sixteen years after Clement Clark Moore first named the reindeer, the name “Donner” replaced “Donder” in the publication of the 1939 story book Rudolph the Red Nosed Reindeer, written by Robert L. May(4).  A decade after the book was published, “Donner” was further cemented into American consciousness when Gene Autry recorded Johnny Mark’s song Rudolph the Red Nosed Reindeer.

“Donder” is Thunder in Dutch. In German, “Donner” is Thunder and “Blitzen” is Lightning, so it is understandable how the mistake occurred.  Nevertheless, the poem was readily available for reference in libraries across the country. Shame on Mr. May and Mr. Marks for not doing their research properly before publishing their work. What right had they to change an American classic?

~Many thanks to Diane Plumberg of The Oklahoman, who wrote about Donder in her article “Twas the Reindeer Spelled Right“, in which she mentions this page.

~Our appreciation to the Canadian Broadcasting Corporation, who interviewed this author at radio stations across Canada about the correct names of Santa’s reindeer.

~Hats off to Roland McElroy, who also researched the Donder/Donner question before publishing his Christmas tale The Great Mizzariddle (published by McElroy & Associates, Falls Church, VA, 1999).

~Kudos to Charles and Debra Ghigna, for making sure Donder was named correctly in their book of Christmas poems Christmas is Coming! (Published by Charlesbridge Publishing, Watertown, MA, 2000).

~Poet Jeff Mondak, while writing the poem A Reindeer Holiday, made sure Donder got the recognition he deserved. Read some of Jeff’s hilarious poems on his site Jeff’s Poems for Kids.

~Applause for songwriter Chuck Picklesimer, for getting Donder’s name right in his song Reindeer for Breakfast on Christmas.

~Acclaim to Harry and Juanita Peckham, who have Donder’s name up in lights at the Pleasant Ridge Tree Farm and Light Display in Rantoul, KS.

~Thanks to Joseph DeFina for letting us know about Hallmark Cards’ 1990-92 Christmas ornaments featuring Donder.

~Thanks to Don Pohlmann for pointing out that, in the original movie Miracle on 34th Street, Maureen O’Hara looks at Kris Kringle’s personnel card and Donder is listed as one of his next of kin.

~Ovations to Jim Reed of Jim Reed Books for making sure Donder was named correctly in his Christmas story My Beautiful Santas.

~Many thanks to fellow Donder crusaders Bruce S and Kriss Wagner for contacting Pottery Barn and L.L.Bean (members of Donder’s Hall of Shame) to let them know they incorrectly named the reindeer on their Christmas gear.  Kriss also took on Cadillac because they used the wrong name in a TV commercial.

~Our appreciation to Ken Brookshire, who pointed out that, in Katherine Hepburn’s role as an employee of a television research department in the 1957 movie Desk Set, she includes Donder when asked the names of Santa’s reindeer.

~Cheers for Rachel D and the Kimberly Clark company. Eighteen years ago Rachel, at the tender age of 10, noticed Donder’s name incorrectly given on a Kleenex box. She sent the folks at Kimberly Clark a photocopy of Moore’s poem, explaining their error. They wrote her back with a letter of thanks for pointing out the error and sent Rachel a free box of Kleenex.

~An ovation for Studio 60 on the Sunset Strip. Christine A let us know that in their 2007 Christmas show, the characters actually discussed during the show the fact that Santa’s reindeer is named Donder and not Donner!

~Applause to Dan Holder of CaptionGallery.com, who pointed out a 2005 episode of The Simpsons, entitled I Saw Grandpa Cussing Santa Claus, where Santa calls for Donder and Blitzen.

~Cheers to The Crescent Beach Hotel in Rochester, NY, and to Paul Tracy for sending a photo of Donder’s name plaque on a reindeer carousel in front of the restaurant there.

~Hooray to Bruce Stein, who let us know about a 2007 rebroadcast of a 1950 episode of Honest Harold on XM radio.  In this Christmas episode, Harold chooses the name “Donder” for his club, whose members take the names of Santa’s reindeer.

~Kudos to Mark Mellin, who forwarded us the link to the 1964 film Santa Claus Conquers the Martians in which Santa remarks “…We’re going out the good ol’ fashion way– Prancer and Dancer and Donder and Blitzen, and Vixen and Nixon…oh, consarnit!  I get those names mixed up, but the kids know their names.”

~Thank you Kimberlee C, for telling us about two made-for-TV Christmas movies that Hallmark (a steadfast Donder-supporting company) has aired on Hallmark Channel.  Steve Guttenberg stars in Single Santa Seeks Mrs. Claus and Meet the Santas.  In one of the movies, his character corrects another character, informing him that Donder is the proper name of Santa’s reindeer!

However, we must not reduce our vigilance because of these small, but important victories. Pass the word! Take back our cultural heritage, and return Donder’s true name to Christmas lore!